(The third installment of my three-part series on what's currently influencing my interpretation of Ronn McCarrick's Baenrahl setting.)

This is the stuff of swashbuckling adventure!

When I started thinking about Baenrahl and the idea of "Dark Swashbuckling," I kept coming back to the adventures of John Carter on the planet Barsoom (Mars). He carried a sword, and thousands fell before it! He wielded a pistol, and his aim was true! He leapt into the fray, and his actions were nothing but cinematic!

Many of the images that come into my head when I think of Baenrahl are inspired by these pulp novels. Here are some examples of what flashes through my mind: 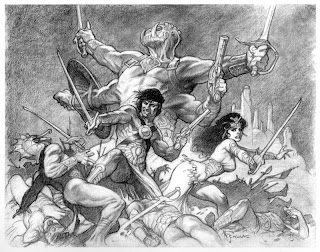 I've gamed with Ronn for over 20 years. Two specific things stand out as the coolest things that he's done in a game, and one of them was the flying ships of Larethon (and their controls). I definitely want to include flying ships such as these, and very similar to the ones in Barsoom.

Adding flying ships can unbalance a fantasy campaign, as can firearms. But both of these existed in Baenrahl, and both will be in my vision of the setting. They may, however, be more prominent.

Overall, the influence comes from pulp-fantasy of it all: armor is irrelevant, firearms and swords are virtually equal, and enemy minions fall to the heroes as though wheat before a scythe.

I definitely want that feel!

And once the heroes rise a bit in level, the simple villains, the soldiers of the Urathear, shouldn't stand a chance against the flashing blades of the heroes.

This will likely involve some rules tweaking, but it will be worth it!
Posted by guodskrap at 8:30 PM

Hit me with your best shot.

What's This Blog About?

This is me talking about my creative efforts -- writing, gaming, and so on.

guodskrap
Plymouth, MI, United States
I am a father, a husband, a gamer, and an artist constantly wrestling with my understanding of the universe.